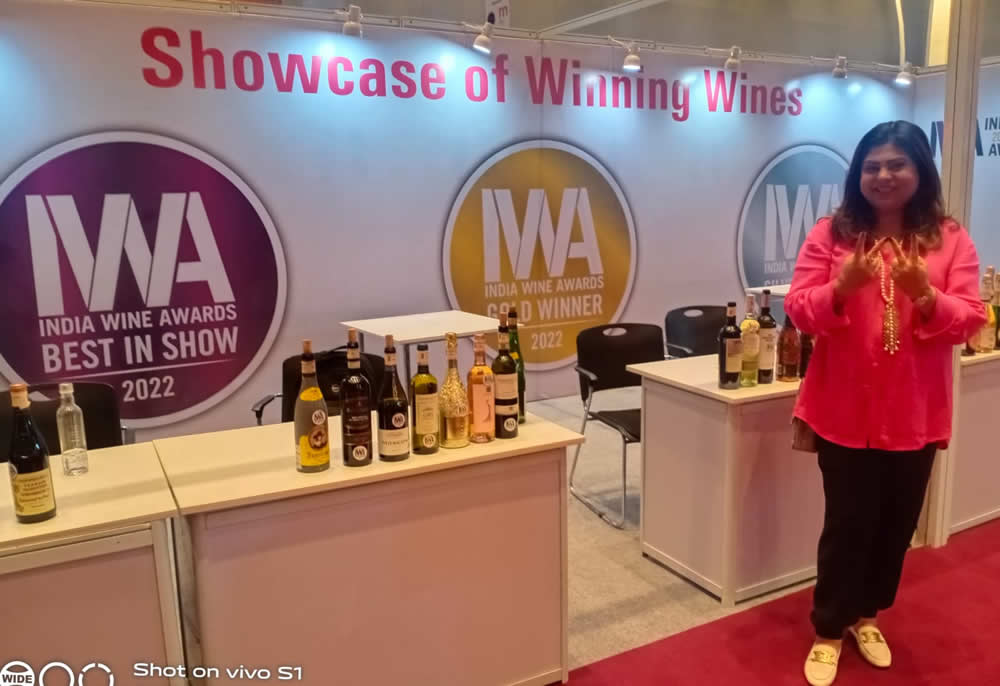 Sonal Holland outside the IWA Stand with the Award winners

From Archives (2007): Should there be an Expiry Date on wine bottles?

Jan 05: This could be a laughing matter for most wine experts. But in the Indian market where wine is stored away for years with the mistaken notion that it gets better with age, and the importers keep on pushing till the last bottle is sold at the original price even when it loses its freshness, it is worth the consideration, avers Subhash Arora, President of Indian Wine Academy.

A few weeks ago we had gone to Mumbai for the release of the Italian Wine Guide in Mumbai. I was at the complimentary ‘Club’ of the Taj Lands End, Bandra where we were staying with my friend , Marco Sabellico, the senior consulting editor of Gambero Rosso , who had been specially invited to talk at a seminar on Italian wines at the book release.

There was a bottle of Corte Giara Soave from Allegrini being chilled, at a decent though not perfect temperature of 12-14° C. When I had the bottle opened the colour was a tad too golden instead of pale. As I took the first sip I found it quite off-putting. Not vinegar but still undrinkable, I thought. I looked at Marco for his opinion. His first impression was that unless it was a special bottle of age worthy wine, the colour was a discouraging sign. A small sip and he instantly concurred with me.

If I didn’t know that Allegrini was a highly respected Veneto producer, I would have banished the thought of taking another sip from any of their other wines in future.

On many earlier occasions I was disappointed with a wine that I had like earlier. Sauvignon Blanc 2002 Valdivieso , Chile had been my favourite from the day it was first  introduced at a Delhi Wine Club dinner in 2003. But when I tasted it at the year-end in 2004 it was not fresh anymore. In a Chilean event at the Taj Mahal in early 2005 it was barely drinkable.

Ditto for my favourite Casillero del Diablo Merlot and Cabernet Sauvignon 2003 which I found great value for money quaffable wines in 2004-5 but were not drinking fresh in the summer of 2006. Valdivieso Cabernet Sauvignon Rosè 2003, which has been a great value for money wine at Olive Restaurant and recommended by us, lost steam last year. I am really amused at restaurant lists proudly displaying 3-4 year old Beaujolais Nuoveau when they ought to be consumed within a few months of release.

Over 95% of wines produced globally are supposed to be drunk young.(The figure for Indian wines is 99%). They may last out a few months to a year. White wines, especially, lose their freshness within a couple of years. Most Sauvignon Blanc, Soave, Rosè, Chenin, cheaper reds etc are best consumed within a year or two.

There is no fixed ‘Expiry  Period’ beyond which the wine cannot be consumed; after it loses its youth wine  is still not toxic or harmful to the body. But, the producers have pretty good idea from experience and the particular vintage about the best performance window about a wine.

Since people are still not properly wine-educated in India , there must be a rule to  print on each label’ Best before..’. It won’t be the first time this guidance would be enforced. Chocolates, beer and many eatables already follow this rule.

Producers and importers will initially be lukewarm to this suggestion. Many of them are saddled with slow moving inventory which will be difficult to off-load with this label after this ‘expiry date’. There are many glaring examples of such wines in the hotels’ wine armoury, which they palm off to unsuspecting guests as complimentary wines ( the amount of ill-will generated can perhaps be gauged if they add a column to their comments list, ‘what do you think of the wine we gifted you as a special guest?’

Producers should be happy since their name does not risk being tarnished for no fault of theirs. Many of them already mention in the wine technical details or tasting notes by when to consume the wine. Of course, the improper storage is a bigger menace over which they have no control. It would help their cause if they also print on the label, proper storage temperature of 13-15° C.

Indian producers will probably be happier. I remember a couple of years ago, Rajeev Samant of Sula narrated an amusing incident at a seminar. The stockists refused to take in the new vintage and wanted them to take back their previous vintage because it was ‘old model’ and had been rendered ‘obsolete’. Sula had a tough time explaining to them the concept of vintage. With a ‘Best by.’ they could print the span of 2-3 years that they feel is the best for the wine.

There is an interesting corollary to the subject. Many of the higher end wines, specially the tannic reds and barrique aged Chardonnays need to be stored for a few years for them to evolve and be fully ready to drink. The amount of Barolos, Barbarescos, and Chateaux wines from Bordeaux that are consumed before they are ready to drink is quite significant. For example Barbaresco’99 from Gaja is a great wine. I still won’t drink mine now but it disappeared from the palates 2 years ago. Caballo Loco No.6 from Chile was another excellent wine but a bit closed when released a couple of years ago. Its time of drinking has arrived but alas, there is no sight of No.6. We should soon see No.8 in the lists. But it might need another couple of years before it is ready to drink.

How about printing, ‘Best after..’ on such wine bottles!?