From Archives (2006): ‘Man With A Mission’: Singapore Oenophile Praises Arora

This competition [14 th Concorso Enologico Internazionale at the 40 th Vinitaly, Verona ] brings together a whole host of personalities, nationalities and types into one hotel and one venue. It offers a great opportunity to interact, to establish new friendships, and to deepen or strengthen old ones. It is an amalgamation of cultures but only one culture is foremost – the culture of wine that binds all participants. .

What a wonderful way to spend time on your favourite beverage. It must be! For you to travel all the way to Verona and endure a strict and tight regime of tastings, full-fledged lunches, back to tastings until 8pm, and then off to a full evening’s social programme of wine drinking, social interaction, full-blown debates and full dinner menus to end at past midnight. Then, up again for a full breakfast needed to fortify you for the first morning session at 9.30am, sharp! All this while, your teeth and tongue get darker and darker, coated with grape skin extract. The main conductor of this orchestra of wine personalities is Dr Guiseppe Martelli. His organisation of this competition is like clockwork with typical Italian flair. Each morning, without fail, he greets all jurors and thanks them for being so punctually seated at their tasting desks. Then, he reads out the previous session’s statistics as if we were all shorthand secretaries. .

Now, the sommeliers were on the roll. In precise fashion, left hand holding the concealed bottle sample, right hand neatly tucked against the small of their backs, they marched out of the preparation room in a style that will make any soldier swoon with envy. “Prego,” said Dr Martelli, and each of the 21 sommeliers marched towards the first juror and poured out a generous tasting portion of wine. .

Precise and strict silence is maintained and all mobiles are switched off during the tasting sessions. On the same morning, at the beginning of the second flight, a lone but loud beeping was heard. Dr Martelli’s eyes narrowed and his long stare reached out to the offender. Immediately, a series of mobile phone beeps, whistles and tones were heard throughout the room! Dr. Martelli face changed into a wide grin. The Fool of April 1 was called – twice! Following Dr. Martelli’s lead, the Jurors took these disruptions in their stride and the proceedings ended on schedule on Sunday morning by lunchtime.

Now, here are some of the varied personalities at this year’s competition. At the first meeting, John looked like a retired Santa Claus, who had come to play with wine. His shock of gleaming white hair and full beard made him look very much the part. His walking stick that doubled as a mobile seat made one wonder if Santa had a bad fall during one of his chimney descents. But no, Count John Umberto Salvi , Master of Wine, has been a wine personality for a very, very long time.

To be precise, he is “around” the 25 th member of the august Institute of Masters of Wine. A true English Gent of royal Italian parentage, John has been living in Margaux , France , for over 38 years, tracking the effect of weather on Bordeaux vintages. These statistics he shares with the world through a very technical subscription-based newsletter. Besides this highly technical stuff, he writes for other international wine publications and has been translated into French, Spanish, Italian and more.

He has been a fixture at this competition since the beginning and is on the organising committee with Dr Martelli. As John warms up to you, you begin to see the true English Gent in him. Always ready for a chuckle or a fib or laugh. Play the ladies if he had half a chance! Most of all, he truly enjoys good company and good food. He is diplomatic but it does not stop him from speaking his mind.

John is a valuable member of the wine fraternity and he counts among his close friends, Steven Spurrier, Michael Broadbent, the Peppercorns and any wine personality you care to name. At the other ‘end’, if you like, still wet behind her ears, is Cathy van Zyl, MW. A South African of Scottish blood, Cathy was elected the 250 th Master of Wine in late 2005. That makes her the only South African MW. Cathy has no airs about her, despite the MW, and warms up to people easily. But she expresses precise opinions in her blog.

The most recent ruffling of feathers was her well-argued demand for accountability in the use of artificial flavours in South African Sauvignon Blancs. In the same vein, the tasting notes in her website are independent and unbiased. These form the basis for the best-selling South African book, John Platter’s South African Wines , which is published annually.

This guide is an entire year’s work by 12 independent wine tasters who sample every wine produced in South Africa . Besides these wine-tastings, Cathy oversees her home overrun by her nine-year old son and manages to work mainly from there, when she is not travelling. Leisure time is spent at a seaside cottage, where she dives for abalone or lobsters in the choppy waters of the Cape .

Subhash Arora is a man with an urgent mission. The President of the Delhi Wine Club and founder of the Indian Wine Academy , Subhash is on overdrive to lead Indians into the exciting and healthy world of wine. He has attended a course in Italian just to be able understand what makes Italian wine-makers tick. He has also learnt French, perhaps, for the same reason. The next language on his agenda seems to be Spanish, especially after his eye-opening experience in Spain at Alimentaria 2006.

Not only is he a quick learner of languages, he’s also quick in understanding the basis of all cultures of the world. He’s able to communicate at all levels of society and this makes him the man to know in India’s fast-emerging wine circles.

Lionel Lau is one of Malaysia’s ‘new wave’ wine pioneers. He is one of a handful of wine merchants who broke the hold of multinational liquor companies on the wine trade in his country. A pioneer in the import of South African wines into Mala ysia, his retail store held one of the more amazing and exciting array of wines in Kuala Lumpur. Then came cut-throat rivals and unfair competition in the industry. He intended to soldier on despite being unable to refuse an offer from an overseas wine merchant. Differences in viewpoints with his new partners forced his departure from distribution into the new realm of consultancy and writing. He writes for The New Straits Times and also does ad hoc articles for Flavours, the leading food and beverage glossy in Mala ysia .

Charles Chow moonlights as ‘Anggur’ for The Edge , writing on various aspects on wine for this leading business newspaper. Despite being a moonlighter, Charles managed to publish a tongue-in-cheek tome on wine, titled Talking Cork in 2002. One would be lucky to find a copy left on some bookshelf somewhere in Mala ysia .

A generous personality, he and his bubbly wife, Baldesh, this brought light conversation during mealtimes after a hard day’s tasting. Flights of sweet wine took a toll on his rather dry wine preference, but that is precisely what wine judging is all about – objectivity, despite the subjectivity. By the way, Charles flies high as Legal & HR Director of the fastest-growing Mala ysian corporation, Air Asia Berhad, hopefully, spreading the culture of wine far and wide in Malaysia .

Franco Giacosa , despite overseeing one of the largest wine conglomerates in Italy , still found time to sit through the entire competition, tasting with the rest of the jurors. This shows the importance he places on this competition, at least for the Italian wine industry. Franco firmly established his reputation as a super oenologist with the wine Duca Enrico of Duca di Salaparuta in remote Sicily .

Remote, then, when Nero d’Avola was a backwater grape varietal for local consumption only and for fortifying Chianti during poor harvests. Franco made Duca Enrico and Nero d’Avola stand up to be counted among Italy’s great wines. Currently, Nero d’Avola is the best-selling varietal in restaurants throughout the country.

Then, Franco moved to Zonin in 1997. He accepted the task to transform Zonin from a great supplier of ordinary wine to a major producer of high-quality wine in Italy’s seven finest wine regions and in Virginia , USA . Nine years on, the results have started to show. I had the pleasure of sampling some of his wines at a dinner in the underground wine cellar of Antica Bottega del Vino with a select group of jurors.

Other interesting members of the panel of jurors: Being a member of the famous Hardy clan of Australia, Kate Hardy is no stranger to wine tasting, and as legal counsel and representative of the Office Internationale de la Vigne et du Vin, it was her job to oversees the proceedings.

Nicholas Ryan arrived in Verona with only the shirt on his back. His luggage travelled the globe several more times before it arrived to allow him junk his three-day-old clothes. From then on, he was the life of the group of younger jurors. Michael Schaefer, Society of Wine Educators, suffered a bad back almost throughout the whole episode, but managed to attend most sessions in controlled suffering with the help of a local chiropractor. His endurance was amazing. Having decided to join us for lunch at a local restaurant on the last day of the competition, he then undertook a 1.5-km walk back to the hotel.

The Czech Republic was represented by Zdenek Reimann and Jiri Trapek . They joined my table at the opening dinner. Zdenek promptly displayed a flair for wine art, spraying our table cloth and my camera with red wine. I was cleaning red wine stains from nooks of my camera even on the last day!

Another almost permanent fixture in this competition is the President of the Portuguese Oenologists Association, Jose Antonio Martins da Fonseca . He was my fellow panel member both in 2004 and 2006. Talk about a random draw of lots!

There were many other personalities and a blur of Italian oenologists, too many to meet and have a decent conversation with. Head nods were made and a few words spoken with writers from China, Taiwan, Poland, Yair Koren of Israel, a friend from 2004, Hungary and Germany. There were oenologists from Switzerland , Germany , Spain’s Murcia and La Mancha regions, Austria , Hungary , Uruguay , Argentina and even Brazil .

(delWine Editor’s Note: It was as if the Wonderful World of Wine had come together for an annual pilgrimage. To read Remie Law’s entertaining reports from the competition, go to httt://www.happyvines.com/VinItaly06 . Tomorrow, we’ll carry Subhash Arora’s fond stories from the tasting of a lifetime.) 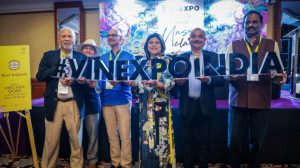 September 8, 2022
TechTalk: Climate Change and Consequences of not Adapting 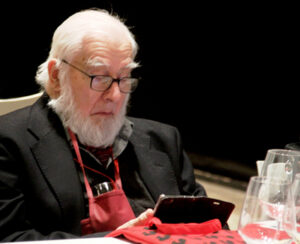 TechTalk: Climate Change and Consequences of not Adapting